skip to main | skip to sidebar

DAY 3: BROUGHT IN OUR TOP REINFORCEMENT/NOW I'VE GOT COMPETITION 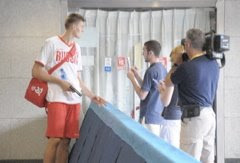 It was back to the men's side today. Anna was out, so we brought in our top reinforcement, Susy from cycling. Team Russia was first on our list. That meant Andre Kirilenko. He's known as AK 47 to most basketball fans, Drago to Susy. I also had Bucknell's own J.R. Holden and Boston-bred head coach David Blatt on the wish list. Russia does pretty well with their Olympic imports overall. We didn't get to go in to the gym when practice ended this time, so Susy and I waited in the hallway/mixed zone. Some of the coaches strolled out first. I wasn't able to grab Blatt from Boston, but I did talk with assistant coach Daniel Gutt.
Then out came Andre. As soon as I saw him, I called out his name. I even tried to say it in a Russian accent. I hope he appreciated that. I'm sure you would have appreciated hearing it. Either way, he came straight over and I introduced myself and commenced the interview with trusty Susy by my side. He spoke English very well and seemed happy to chat. On his way out, he even stopped to pose for a picture with the eager Chinese volunteers. My buddy Zhang Bo had his camera today.
The next round of players gradually came out and I spotted Holden. He's fairly easy to spot being the only black man on the team. Holden was on the phone but I really wanted to talk with him about playing in the Patriot League (Go Holy Cross!) and working his way up to the Olympics. Unfortunately he just wasn't having it. That's all right because we had enough quotes to turn in. Our manager only wants 3-4 quotes per team and reiterated that when I think I gave him two hands full of quotes the first day.
The second team scheduled for the day was Spain. As they were practicing, a solid amount of reporters and cameramen walked in. It was clear they wanted Spain too. Now I've got competition. That's cool though because I kind of wanted the challenge. No one was going to stop me from talking with Jose Calderon, who was a major boost for my assists down the stretch of fantasy season. As for the Gasol brothers, I "assisted" Susy with what to ask either of them if she got the chance. 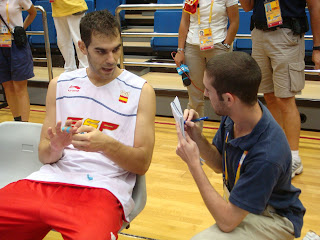 This time when practice ended we got to go in to the gym. I think I'm just going to have to keep asking during every practice and just hope they let us in. It's a lot easier to interview athletes when they're not all packed up and ready to head out the door to the bus. So I approached Calderon when he came back to the sidelines and sat down. I was curious about the experience he gained at point guard and as a leader on the Raptors when T.J. Ford went down with a neck injury that was hard to return from. I got my best quote out of that answer because he was able to relate the experience he gained to helping Spain. Zhang Bo got pictures of me interviewing Calderon and I think Kirilenko too, so look out for that.
Meanwhile Susy got a hold of Marc and asked him about "you" playing in the paint against "Yi" and "Yao." The alliteration was pretty funny. Pau was unavailable because the other media had priority, this time. We were done after that because the final team, Australia, turned out to be the bail of the day. Sorry, no Andrew Bogut. Oh well. Saijian.
Posted by Flash Quote Fun With Foley at 9:28 AM